Understand the meaning of the Order’s emblems, Jewel of Oﬃce, and the role as a council fraternal leader 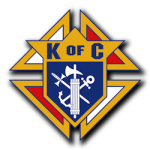 The emblem of the Order dates from the second Supreme Council meeting, held May 12, 1883. It was designed by then-Supreme Knight James T. Mullen.

The emblem is composed of a shield mounted upon the Formée Cross. The shield is associated with medieval knights. The Formée Cross is a traditional artistic design of the Cross of Christ and represents the Catholic spirit of the Order.

Mounted on the shield is a vertically standing fasces with    an anchor and short sword crossed behind it. The fasces  dates from the Roman Empire and is symbolic of authority, which must exist in any tightly bonded and eﬃciently operating organization. The anchor is the mariner’s symbol, symbolic of Columbus, patron of the Order. The short sword was the weapon of the knight when engaged upon errands   of mercy. Together with the shield and the letters K of C, these symbols express Catholic knighthood in organized, merciful action.

The colors of red, white and blue in the background of the shield and the foreground of the Formée Cross are colors that represent noble aspects of the Order. Red is symbolic of stout-hearted courage, of pulsing activity and a full measure of devotion. Blue is symbolic of hope, of calm tranquility under God and of confidence in the protection of one’s country. White is symbolic of nobility of purpose, of purity of aim and of crucible-tried ideals to be carried out.

There are also ecclesiastical symbolism for the colors red, white and blue. Red is symbolic of Christ’s redemptive blood, shed upon Calvary, and of the martyrs’ blood,   shed in defense of faith. Red is the symbol of faith, belief in Christ, redemption and knowledge of the love of Jesus Christ. White is symbolic of the Eucharistic host, pledge of God’s Eucharistic presence among men, the infinite love God has for man and the overwhelming aﬀection which

God has for each individual. White is symbolic of Christ-like charity. Blue is symbolic of Our Lady’s mantle, in which she wrapped her beloved Son, through whom came salvation to  a sinful world. Blue is the symbol of hope.

Unless otherwise noted, the following positions are elected annually by your council’s membership. 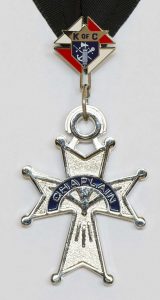 Additional information on the role of the chaplain is contained in the Chaplain’s Handbook (#945).

The jewel of the council chaplain is a silver Isabella Cross, overlaid with a descending dove, suspended from a ribbon of black. This style of Cross is associated with Queen Isabel of Spain, promoter of the voyage of Christopher Columbus. A Cross is a symbol of hope through atonement, reminding Christians of God’s love in sacrificing his own son for humanity. The dove, emblem of the Holy Spirit, represents the gift of the Word of God. The ribbon of black represents strength and authority. 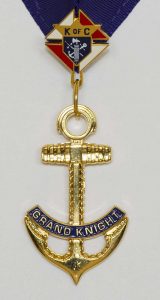 Additional information to assist the grand knight in the performance of his duties can be found in the Grand Knight’s Guide (#5085), the Knights of Columbus Leadership Resources (#5093) and the Method of Conducting Council Meetings (#10318). Further details are also available on the Knights   of Columbus Fraternal Training Portal.

The jewel of oﬃce for the grand knight is an anchor suspended from a ribbon of purple. The anchor is symbolic of Christopher Columbus, the mariner, who is the patron of our Order. The anchor, for centuries, was also a variant form of the Cross and symbolizes Christian hope. The ribbon of purple symbolizes authority and justice. 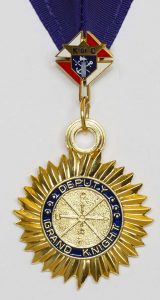 The deputy grand knight should be familiar with the

The deputy grand knight’s jewel of oﬃce is a compass suspended from a ribbon of purple. A compass is the constant guide and companion to the mariner, and was an invaluable tool used by Columbus to guide him to the shores of the New World. The Knights of Columbus “compass of virtue” has 32 flame-like rays; each ray represents a virtue that people can aspire to emulate in their daily lives. The ribbon of purple signifies authority and justice. 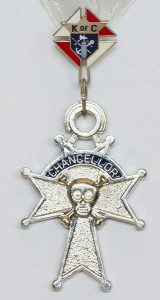 It is recommend for the chancellor to be familiar with the Order’s qualifications for membership, the Membership Document (#100) and the Member/Prospect Interest Survey (#1842).

The jewel of the chancellor is the Isabella Cross, overlaid with a skull and crossbones, suspended from a ribbon of black and white. The Cross represents atonement and the love of God, who sent to us his only begotten Son. The skull and crossbones are symbolic of man’s mortality and the vigilance required to remain faithful at all times.

Through the unity of the council, brothers help each other remain steadfast in their faith. The ribbon of black and white signifies strength and goodness. 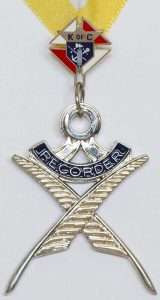 The jewel of the recorder is crossed quills suspended from a ribbon of yellow and white. The quills represent writing,

knowledge and communication, and are also symbolic of the recorder’s duty to write and preserve letters and documents (records). The ribbon of yellow and white represents intellect and goodness. 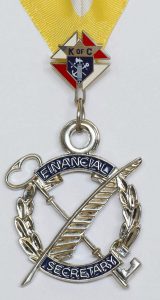 Additional information on the duties and responsibilities of the financial secretary can be found in the Knights of Columbus Leadership Resources Book (#5093).

The jewel of the financial secretary is a key and quill surrounded by a laurel wreath, suspended from a ribbon of yellow and white.

The key is associated with guardianship, while the quill is the symbol of a “scribe” — one who writes and keeps track of various letters and documents. The laurel wreath acknowledges the special service of the financial secretary to his council. The ribbon of yellow and white represents intellect and goodness. 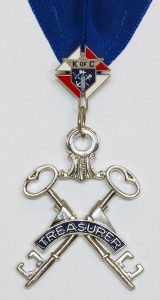 The jewel of the treasurer is crossed keys suspended from a ribbon of blue. The keys symbolize the guardianship of the funds of the council. The ribbon of blue represents truth and loyalty. 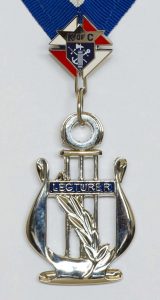 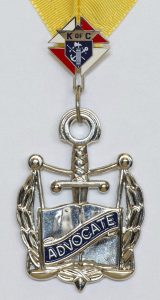 The jewel of the advocate is a scroll and sword, surrounded by a laurel wreath, suspended from a ribbon of gold. The opened scroll represents legal literature and signifies the power of knowledge, and the sword represents its defense and enforcement. Thus, it is the advocate’s role to not only know the laws of the council, but to also follow them strictly. The ribbon of gold represents faith, constancy and wisdom. 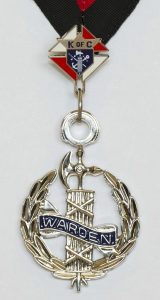 The jewel of oﬃce of the warden is an axe bound with a fasces, surrounded by a laurel wreath, suspended from a ribbon of red and black. The fasces was a traditional symbol carried by the protectors or guards of the Roman magistrates as a symbol of authority and protection. The ribbon of red and black represents strength and fidelity to duty. 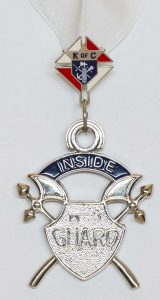 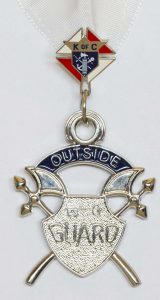 The jewel of the council guards is crossed axes and a shield, marked with a key, suspended from a ribbon of white. The shield and axe are symbolic of protection, and key is emblematic of guardianship. The ribbon of white represents purity and diligence to duty. 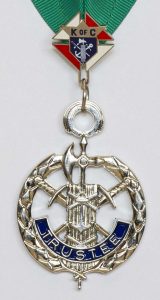 The trustee jewel of oﬃce is composed of  an ax and fasces overlaid with an anchor, positioned over crossed swords, surrounded with a laurel wreath and suspended from a ribbon of green. The fasces is an ax bound with rods. The swords symbolize justice and

honor. The laurel wreath symbolizes special service. The trustees are generally past grand knights, and this is the reason for the anchor over the fasces. The ribbon of green symbolizes loyalty in love.